Our country's current internal conflicts and divisions make us even more grateful for our progressive education principles, specifically to our commitment to "Democracy in Action."

Our programs and traditions give children daily experiences in a variety of democratic practices. They see first-hand how a community can use conversation, different styles of voting, inclusivity, listening, and mutual respect, to constructively resolve problems and make group decisions.

Democracy in action is also one of the primary ways in which we honor children's voices and give them a say in what they'd like to learn about and what matters to them. Democracy in action during project work cultivates cooperation and teamwork skills.

Democracy in action assures each child that they are a valued and important member of our school and our wider community. It instills an appreciation for civic participation and responsibility, it empowers self-advocacy, and it defends space for hearing and honoring minority opinions.

Here's an example of how democracy in action at TCS starts in Kindergarten, reported by teachers Nadine Brockman and Kendra Roberts in a recent parent newsletter:

"We asked the children about our Friday dance parties and whether we wanted to continue this child-created routine. We heard children state that they did indeed want to continue. We heard: 'I want to have dance parties.' ' I love it.' 'I like the instruments with dancing.' 'I like to watch and listen to the music.' 'Sometimes I feel shy, but I want to do it.' We all concluded that everyone desired our Friday dancing to continue.

"On Friday, a child brought forth the idea of having Pajama Day. The group loved this idea and had many thoughtful questions about how to navigate pajamas with warm outerwear. Elaborate and amazing conversations unfold when a discussion is relevant and interesting to children. They came to the conclusion that each child can decide how best to wear their pajamas. For some, It might mean wearing pjs on top of outerwear. Others said they preferred to wear them under their outerwear to keep them clean."

Democratic process is not simply majority-rule at TCS, but rather using various means of exchange and voting styles to resolve issues those opposing a proposal might have. Two examples of this are "Can you live with this?" and "Fist to Five:"

"Can You Live with This?"

When a class or group votes on a matter after hearing all sides of the issue and accommodating everyone's views as much as possible, students who opposed the issue are asked whether they can "live with this."

"Can you live with it?" is not meant as a chance for the losing side to reiterate the same arguments, or to express unhappiness at the outcome. It is meant for someone to present something that the majority has not considered, or has not given sufficient weight to. Outcomes do NOT change very often based on Can you live with it? It's rare. A famous example from early in TCS' history was when the whole school voted to have only those classrooms be peanut-free that had students with a nut allergy. A Kindergarten student raised his hand for "Can you live with it?" and said that he couldn't live with it, because he had a nut allergy, and this new vote would mean that he could not go to another classroom during all-school lunch. So the majority reconsidered, revoted, and made all classrooms nut-free.

Similar to alternative voting like fist to five, Can you live with it? is designed to enhance and protect minority voice so that we don't get a "tyranny of the majority" ala De Tocqueville. The question of majority vs. minority rights is HUGE, at TCS and at all levels of local, national, and international politics. On a personal level, it is about getting one's own needs met while also respecting the needs of others in the group and of the group itself.

Instead of just a "Yes or No" vote, our older students are learning the value of ranked choice voting, as well as the "fist to five" system. Fist to five encourages thoughtful consideration of a proposal by the voters and fosters more productive conversation.

Here's how it works. A question or proposal is called, and students raise their hand in one of the following gestures to say: FIST: "I oppose your proposal so much that I will work to defeat it," ONE FINGER: "I'm opposed to your proposal, but I won't necessarily work to defeat it." TWO FINGERS: "I have some concerns, but will go along and try it." THREE FINGERS: "I'm neutral but okay with whichever way the vote goes." FOUR FINGERS: "I like and support this idea." FIVE FINGERS: "I like and support this idea so much that I will work to make sure it moves forward." In most cases the students are asked to explain their reaction. Sometimes the class splits up into groups -- those who raised one finger, those who raised three, etc. so that they can discuss among their group their objections or support and present their views as a team. After hearing everyone's reasons for their chosen gesture, sometimes students change their positions so the vote is taken again before its final.

Our dedication to Democracy in Action continues and informs our social justice work and our commitment to greater educational equity at TCS.

In these times of so many changes and challenges, we hope that you, too, will feel welcome and invited to share your important voice in our community on any issue of concern to you, or bring any new ideas to our staff, faculty or board. 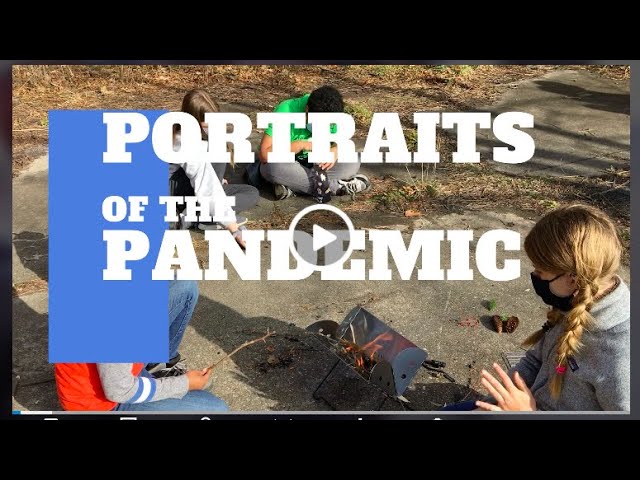 Looking Toward Our Future!

F is for “Friluftsliv”